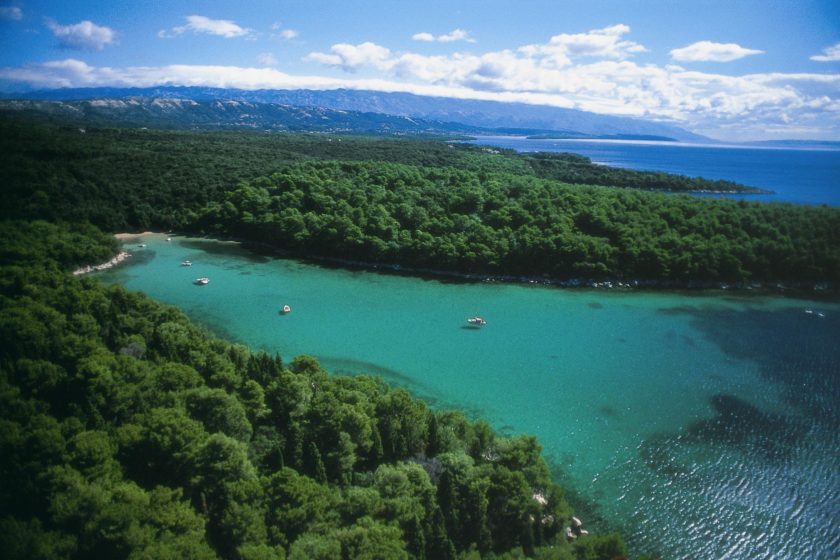 The Dundo Forest can be listed among the most beautiful and well-preserved holm-oak forests of the Mediterranean. This area has probably the longest tradition in the protection and conservation of forests among the most deforested islands of the Adriatic. We hope this special reserve of forest vegetation will continue to be a site of study for many future generations of foresters and natural scientists, and a site where nature lovers can come to enjoy the primordial world of Mediterranean forests.

It is located in the northwest of the island. Kalifront Peninsula is characterized by karst relief and coastline with many beautiful large and small bays. The length of the peninsula is 9 km. The width of the bay is 3 km.
The forests of the peninsula Kalifront are ideal for relaxing hiking. Hilly areas and trails are not strenuous, so the elderly can enjoy too. Kalifront Peninsula is famous for its holm oak that stands out in a beautiful forest Dundo. Dundo is one of the few surviving forests in the Mediterranean and the most important forest on the island of Rab. Holm oak (Quercus ilex) is an evergreen oak that can reach the age of a thousand years. A few impressive specimens are preserved in the forest.

Another green wonder of the island is Komrčar park, planted and designed by a forester Pravdoje Belija in 1883.

The Blue World Institute’s “Adopt a dolphin” is a platform to sustain the Adriatic Dolphin Project, the longest-running conservation research project in our region. Your generous support allows us to maintain our research and conservation activities for bottlenose dolphins – and other dolphin species – and to increase public awareness at local and national levels. It also supports the Dolphin Day, educational programs, and promoting overall protection of the Adriatic marine environment.
https://www.blue-world.org/get-involved/adopt-a-dolphin/

The Adriatic Dolphin Project is the longest ongoing study of a single resident bottlenose dolphin community in the Mediterranean Sea that started in 1987. The aim of this project is to research the population ecology and conservation biology of bottlenose dolphins and other Cetacean species in the Adriatic Sea using genetics, population, and habitat modeling and disturbance factors. Since the outset, the project has been an example of best practice in the successful integration of scientific research with practical conservation resulting in the declaration of six Natura 2000 sites for bottlenose dolphins. The science undertaken by the Adriatic Dolphin Project aims to provide information to the public and relevant authorities and promote the protection of the dolphins and their habitat.

Bottlenose dolphins are protected under Croatian law and are placed in the National Red List, categorized as “Endangered”, but without evaluated trends. Their research and conservation have been listed as a priority in Croatian and European nature protection. As such, our research can aid in developing appropriate conservation strategies in the Adriatic Sea and help in the implementation of the Natura 2000 priority actions for marine biodiversity.

The common bottlenose dolphin (Tursiops truncatus) hereafter referred to as “the bottlenose dolphin” is possibly the best known and most widely distributed of all Delphinidae species. The basic biology of this species is well documented. It has a fusiform body shape (streamlined); body color varies from dark grey on the dorsal cape to pale grey on the side and white on the underside, which may have a pinkish glow when the summer water temperature is high. The bottlenose dolphin measures between 1.9 m to 4 m when an adult and weighs anything from 100 kg to 500 kg. In the Adriatic, animals usually reach up to 3 m in length and weigh about 200 kg. Dolphins must surface every few minutes to breathe. The single blowhole is located on the dorsal surface of the head and is covered by a muscular flap that provides an airtight seal when diving. Bottlenose dolphins remain submerged for 4 – 7 minutes when foraging for fish. Bottlenose dolphins feed mostly on benthic fish and small squids and therefore are often in direct competition with fishermen. They are famous for their curiosity and this makes them prone to entanglement, particularly in gillnets, which in turn is a major form of premature death for the species. Although there is no current worldwide estimation of their population, based on the aerial surveys we carried out, their number in the Adriatic is estimated at around 10,000 individuals. Pollution, overfishing and habitat destruction reduces the numbers of these dolphins and confines them to limited habitats.

The Sea Turtle Rescue Centre was constructed as part of the ”Network for the Conservation of Cetaceans and Sea Turtles in the Adriatic (NETCET)” project funded by the European Union Instrument for Pre-Accession Assistance (IPA) Adriatic Cross-Border Cooperation (CBC) Programme. The centre is part of the network of rescue centres for conservation of sea turtles in the Adriatic Sea.

Sea turtles are an ancient group of animals, inhabiting Earth for millions of years. Today they face many threats that cause their numbers to decline. The loggerhead turtle inhabits the entire Adriatic Sea year-round. It nests on beaches in Greece, Turkey and Cyprus and the hatchlings reach the Adriatic Sea as they mature. In the northern Adriatic, they enter the benthic phase of their lifecycle when they feed on benthic crustaceans and mollusks. As the northern Adriatic is a shallow sea, it represents a key habitat for loggerhead turtles. Being cold-blooded animals, sea turtles spend the cold winter months ͚hibernating͛ on the bottom of the northern Adriatic Sea.

Tarentola mauritanica is a species of gecko (Gekkota) native to the western Mediterranean area of Northwestern Africa and Europe and widely introduced to America and Asia. It is commonly observed on walls in urban environments, mainly in warm coastal areas. However, it can be found further inland, especially in Spain. A robust species, up to 150 millimetres long, its tubercules are enlarged and give the species a spiny armoured appearance.

The species was first described by Carl Linnaeus in 1758.

Adults can measure up to 15 cm, tail included. Robust body and flat head. Back, legs and tail with prominent conic tubercles. Its regenerated tail is smoother and doesn’t have tubercles. Obtuse mouth, big eyes with no eyelids and vertical pupil. Fingers with big lateral growths and adherent division less laminae in the bottom face. Only the third and fourth fingers end in union. Brownish grey or brown colouration with darker or lighter spots. These colours change in intensity according to the light. When they are active by day their colour is darker than during the night. It can be found on many construction sites, ruins, rock fields, tree trunks, etc

House gecko (hemidactylus turcicus) abide in the countries bordering the Mediterranean and the Red Sea, West Asia. They live in dry areas with gravel and stone walls. They are active at night. Flesh-colored on the lower side, with brown spots and lot of warts, big eyes, vertical pupils, from 8 to 10 cm long. Makes a loud clicking sound when calling to females or fighting other males.

Wall gecko (tarentola mauritanica) abide in the western part of the Mediterranean, Dalmatian, the Ionian Island, and Crete in the east. They live in dry, sunny and rocky areas. Likes staying in gardens and on houses. Loves the sun. Light-grey, brown or black on the upper side, with several rows of scales, cream-colored on the lower side, stocky and flat, vertical pupils, from 10 to 19 cm long. Lays sticky, soft-shelled eggs; the young hatch only after 120 days. Quite hissing.

Geckos are small lizards of the family Gekkonidae. After a juicy bite, they lick their face and eyes clean with their long tongue. Like all the other lizards of this family, gecko do not have any eyelids. That is why their impertinent gaze may make you feel uneasy. They can jump great distances and climb vertical surfaces on their unusual legs. Killing geckos is illegal and punishable by law.