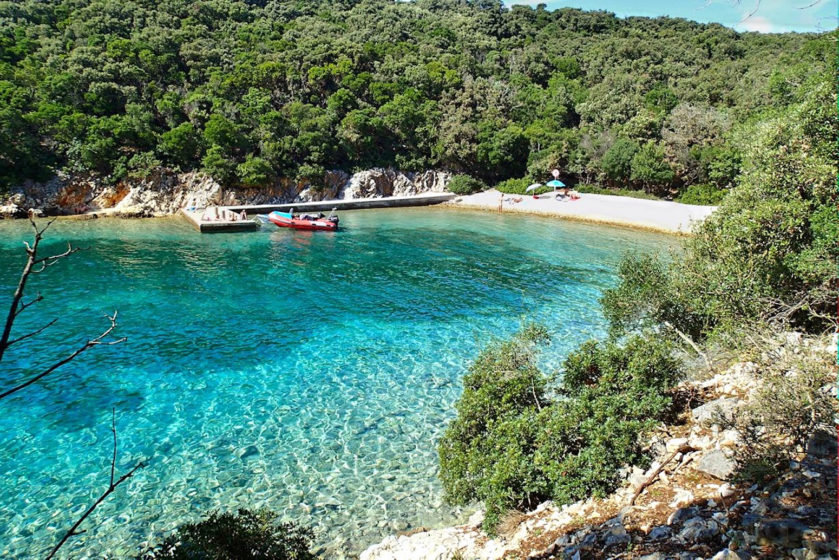 The crystal-clear Adriatic Sea splashes the intact and diverse shores of the island that make the whole island a unique seaside resort.

The summer sea temperatures vary from 25 to 27 degrees Celsius.

The island offers beaches to fit everyone’s taste: rocky beach in the west, pebble beach in the east, and sand beaches in the north of the island.

Those appreciative of peace and quiet will find bays on the forest-covered peninsula Kalifrant especially interesting. Moments on those beaches are moments to last you a lifetime – rock, small stones and green forest contrasting with the blue Adriatic.

Rab is ideal for volleyball on the sand. We would like to mention sand beaches with volleyball tournaments: “Mel” in Kampor, “Paradise Beach” in Lopar  and “Pudarica”

It is essential to mention the island of Rab, as a forerunner of naturism on the island. People mention August 1936 when Edward VIII, the King of England was there, and the town authorities had allowed him to swim in the nude with his wife in Kandarola cove. But surely naturism started much earlier. The president of the international naturist union Richard Erhman from Vienna opened the first naturism beach on the island personally in 1934. Naturism on Rab is also mentioned in the articles of Joseph Herman from the Czech Republic in 1907, which proves that the local people had realized the bright perspective behind such tourism.

The one and a half kilometer of beautiful beach and its forest background is called “The English beach”. Romantic swims in the intact Rab’s bay have been the climax of a cruise that, a few months later, lead to the divorce of Wallis Simpson and her marriage to King Edward who had to abdicate the Crown and take the title of The Duke of Windsor.