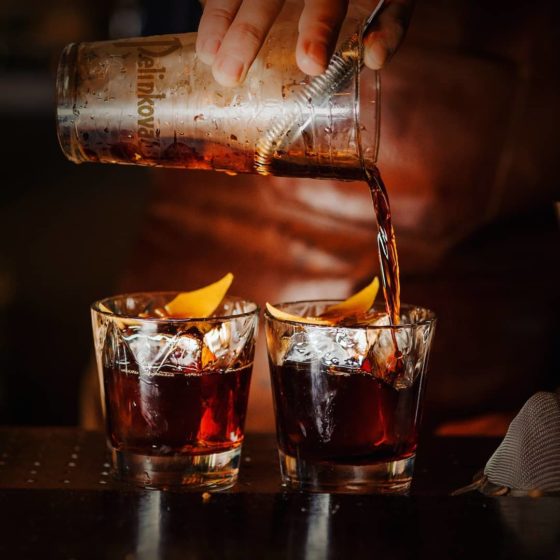 It seems that many Central European nations have some sort of a bitter-tasting liqueur based on wormwood and a bunch of other herbs.

The Germans have Jägermeister, probably the most famous brand among them, there’s also Underberg, the Hungarians have Unicum, the Czechs have Becherovka, and so on. Croatia is no exception.
Here we have Pelinkovac. The name is pretty straight-explanatory, as it derives from the word pelin, for wormwood ( Lat. Artemisia Absinthium). Variations of it are also popular in the neighboring countries. All major Croatian distilleries have their own version. Most popular are made by Maraska and Badel Distillery, and as in football rivalry, there are those who like just Badel and those who like just Maraska Pelinkovac, although there are other “clubs”/distilleries which produce Pelinkovac; Dalmacijavino, Darna Distillery (Rovinjski Pelinkovac), Zvecevo…
The alcohol volume is from 28% in Marsaka’s Pelikovac to 32% in Dalmacijavino’s Pelin.

Pelinkovac on the Adriatic coast is served pure, with ice and lemon, as an aperitif or digestif.
Some people like it with lemon juice made from 1/4 to 1/2 of fresh lemon, and it is called “Štrukani Pelinkovac”, The nickname for Pelinkovac is Pelin.

Pelinkovac is known as “stomach restorative”.
It can be bought in some shops out of Croatia.

ANTIQUE PELINKOVAC is Badel’s oldest and most famous premium herbal liqueur and also one of the most intriguing Croatian drinks. The product dates back to the year 1862, the founding year of the company Badel 1862.

It was created by Franjo Pokorny, a tradesman, and founder of the company Badel 1862. At that time Antique was sold solely in pharmacies with the recommendation “stomach restorative”. It was so successful that Franjo Pokorny became the supplier of this fantastic liqueur for the Viennese and French royal courts, and in accordance with records from that time, it was also exported to America. The recipe for the production of Badel Antique Pelinkovac is the oldest and most secret in Badel 1862 archives (…) and the original bottle in which the product is sold is exhibited in Zagreb City Museum.

Since the year 1862 Antique Pelinkovac is produced in the same, traditional manner, in accordance with the original recipe, from 100% natural ingredients. To those who understand the production technology of fine liqueurs, we shall reveal that selected aromatic herbs are first macerated in alcohol, and then the aged macerate is distilled in small series in coppers and after it is aged, it is manually bottled and thus it is a true Croatian craft product. Every bottle is marked with a unique serial number printed on the label at the back of the bottle. The flavor of this premium herbal liqueur is dominated by wormwood (Cro. Pelin), an aromatic herb characterized by its scent and bitter note, by which it is remembered and recognized due to the beneficial effect on the human body, thus making Pelinkovac the perfect digestive but also one of the best bases for traditional aperitif cocktails. (…)